Women trying to enter the trucking industry have long faced cultural and physical barriers. Presently, there are an estimated 200,000 women behind the wheel of big rigs across the U.S, which seems like a lot; however represents less than mere 5 percent of the nearly 4 million-member truck-driver work force. Had Ellen Voie never cared about the women looking to enter the male-dominated trucking industry, the world would still have been waiting for someone like her to change the scenario for the better. But she was not ready to wait for someone else; she took the charge in her own hands and founded Women In Trucking in 2007. Today, a decade later, the firm is globally recognized and applauded for promoting careers in trucking for women and demolishing barriers that have kept women from joining the driver ranks for so long.

The Foundation that Paved Way for WIT

Ellen’s journey has taught her everything she needed to, and wasn’t less than a roller coaster. Her childhood roots to a small town in central Wisconsin. From the beginning, she was more interested in understanding engines and learning skills like woodworking and welding, so she took shop class. Because of her training, Ellen was hired by a steel fabrication plant to design material handling equipment, like pallets and racking. Soon, she was offered a position in the traffic department, where she became the Assistant Traffic Manager, and later, after earning a diploma in Traffic & Transportation Management, she was promoted to Traffic Manager. Ellen was responsible for all incoming raw materials and outgoing finished products. She learned to read tariffs, audit freight bills, dispatch and much more.

The Journey of Discovering a Platform to Bring Diversity

Once she started her family, she used these skills to free-lane as a Transportation Consultant to carriers in central Wisconsin. For 18 years, she licensed and permitted the trucks and kept the trucks and drivers in compliance while she raised two children. Ellen’s (then) husband and she owned a small fleet, which she helped manage while he was on the road.

At the same time, she also attended the University of Wisconsin and in 1999, she earned her Master’s Degree in Communication, where she completed her thesis research on “The Complex Identities of Women Married to Professional Drivers,” which shows how much passionate she was.

A year later, Ellen was hired by Trucker Buddy International as the Executive Director of this pen pal program between drivers and elementary classrooms. Later, she managed recruiting and retention programs for Schneider National. It was during this time that Ellen was also working for her Private Pilot’s License, and she belonged to an organization called, “Women in Aviation.”

Since there was no such group for women in the trucking industry, she decided to start a non-profit organization. She asked female leaders to serve on the board and was fortunate to have an attorney provide all of the legal documentation to form the nonprofit.

Finally, in 2007, the Women In Trucking Association was formed with a simple mission; to increase the percentage of women employed in the trucking industry, address obstacles that might keep women from succeeding, and to celebrate the success of its members. Once it was started, there hasn’t been a single moment of looking back.

Being Resource for Women

In the past decade, the firm’s membership has massively grown to include nearly 4,000 members, from around the world. Although most of its members reside in North America, many are in Australia, New Zealand, Sweden, South Africa, and Japan.

Currently, WIT has an amazing Board of Directors comprised of leaders (men and women) in the trucking industry – from carriers, suppliers, manufacturers, private fleets and more. Apart from that, it has also formed a charitable foundation that provides scholarships to anyone seeking a career in transportation. Last year, the foundation gave away $22,000 in tuition grants.

Some of the highlights of company’s programs include the creation of a Girl Scout Transportation Patch. To date, over 400 young girls have learned about careers in transportation with the curriculum Ellen developed with the Girl Scouts. Some resources include its “Anti-Harassment Employment Guide,” for carriers who have unrelated individuals working together in a truck for training or team driving purposes.

The firm has a “Recruiting and Retention Guide” outlining the research the team has done on what women look for in a carrier and in an industry. However, a fact that has never changed since its inception is that Ellen and her team has been constantly working on a ‘Best Practices’ guide for carriers to showcase companies with a higher percentage of female drivers.

To celebrate the company’s success and honor female professional drivers, WIT has its annual “Salute to Women Behind the Wheel,” in March. It also has a “Distinguished Woman in Logistics” award as well as an “Influential Woman in Trucking” award. They showcase a different woman each month for their “Member of the Month” program.

Listening to Understand How to Better Serve

Ellen feels proud of the partnership they have with the truck manufacturers to influence truck cab design and ergonomics so women can feel as comfortable driving a big rig as her male counterparts. Moreover, they also work with truck stops on safety, security and amenities for women.

Being the CEO of a nonprofit association, the most important characteristic Ellen believes she can have is to listen. She feels listening to her members to understand how to better serve them and help them to be as successful as possible in the trucking industry is of vital importance.

The most important value that has stayed with her all these years is her integrity. “When I started Women In Trucking Association I had to prove that I would use our member’s dues in a responsible way to advance our mission. Our financial and other information is very transparent, as we have nothing to hide. Our members deserve to know how their money is spent,” she explains.

Being the Change of Women Empowerment

In 2012, WIT was recognized by the White House for being a “Transportation Innovator Champion of Change.”In 2015, the firm launched its first conference and welcomed 350 attendees to its Accelerate! Conference and Expo. This year, Ellen expects over 500 registered women and men to attend its event to learn how to advance diversity in their companies.

Being the change of women empowerment, Ellen advises women to keep pushing, but not to give up easily. Anyone working in a male dominated environment like the trucking industry will find opposition, from family, friends and peers. But, according to her, it’s important to learn to focus on your chosen career path and ignore those who try to distract you.

As an international association, WIT is often asked for more regional or local connections. Going into the future, Ellen’s goal is to start chapters within states, companies and geographic areas. She believes this will give her members a way to connect in person and to network and learn from one another.

e-File it today at http://TaxExcise.com, the only website to support all the Federal Excise Tax forms at one place and at an affordable price, simple to use website. 100% Accurate and 100% easy. 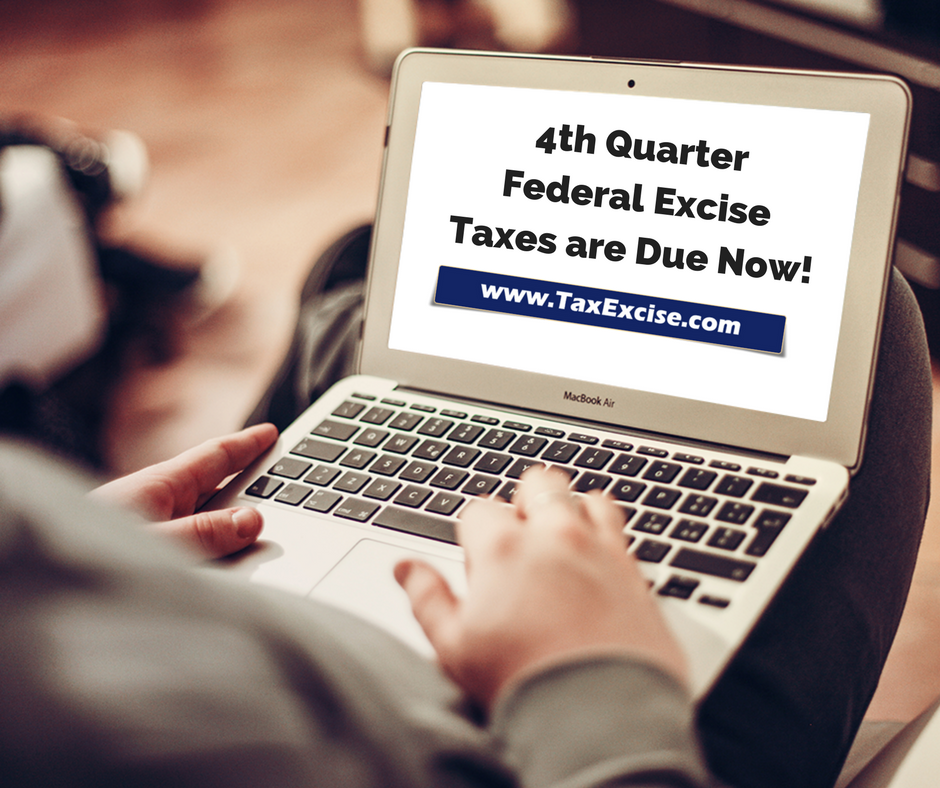 #Tax Form 2290, is due for all vehicles used for first time in December

#IFTA Fuel Taxes are due for the 4th Quarter reporting.